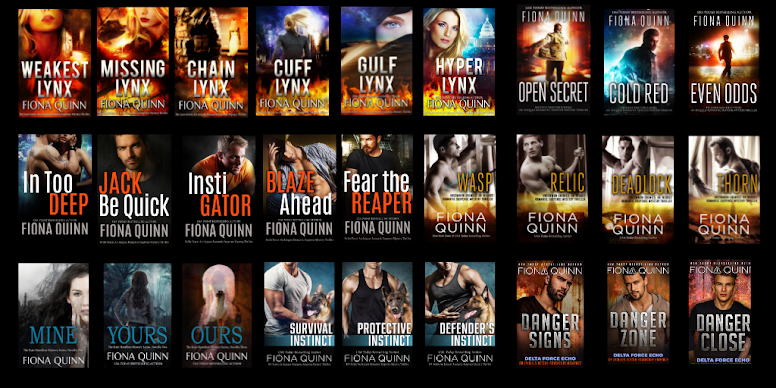 EDC Tampons: How to Save Your Character's Life 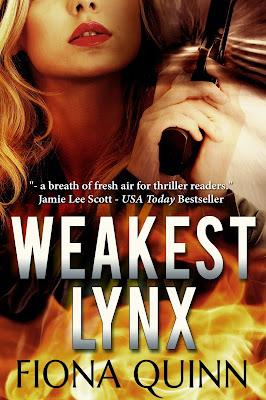 I grinned, looking down into my stew.
Striker caught my grin and considered me. “You know where she put it, don’t you.” It was a statement, not a question.
I looked up and held his eye for a moment, the smile lighting my face. “She probably stuck it the same place I would if two macho guys were on my trail.” Everyone turned to me and waited expectantly. I looked from face to face, and then back to Striker. “I’d put it in the place every girl knows a man would overlook—the bottom of her tampon box.” I spooned more stew into my mouth.
Striker looked over at Randy and Blaze. They wiped their mouths and pushed their chairs back, heading back out the door.
~ WEAKEST LYNX
_________________


So, you did it again! Your hero is trying to save the day, and you've given him what to work with? A condom, a tampon, a Bic, and a knife and somehow he's supposed to keep your beautiful heroine alive while the world is imploding? Jeesh!

All right, let's see what he can do to get her out of this mess.


Tampons are classified as a grade 2 medical item, so let's start with the obvious:

*  Yeah that kind for sure, but unless you're reading Fifty Shades of
Grey, that's not typically part of a plot line.
*  Staunching nose bleeds
*  Lost tooth - bite down on the tampon when a tooth is knocked
out.Your character knows she should reinsert the tooth into the
original hole if she could find it. But since the tooth is back at the
site of the explosion, she uses a tampon to staunch the bleeding.
*  Plug bullet hole wounds.
*  Wound care: the tampon can be opened, laid across the open
gash, and taped or tied in place. If it's on an
appendage and the rescuers don't have time to apply pressure or
your setting is dirty, this is the time to
use a condom (Blog Link - Condoms for Survival) to hold the
tampon in place. If using tape (duct),
the plastic wrapper from the tampon  is highly waterproof and
can be used as part of wound dressing.


This is a container in my EDC (every day carry) bag. 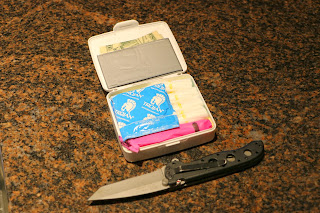 It normally holds:
* a knife
* 3 condoms
* 4 OB
* 1 Kotex click super plus
* 1 Always clean pad (comes
with a wipe attached
- great for cleaning a wound of debris before applying a        dressing)
*Duct tape and cash 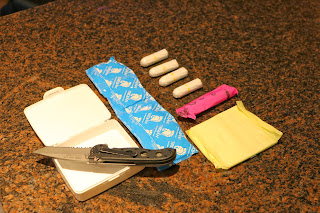 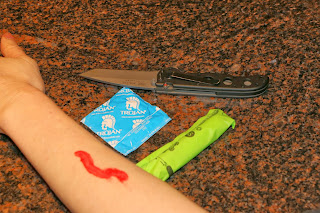 To attend this gash I would use the knife, condom and Kotex. I choose the Kotex because it rolls out like a sleeping bag to make an absorbent rectangle. 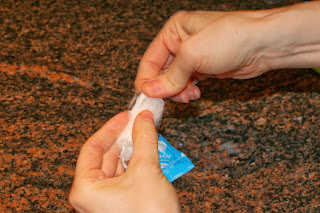 Remove the netting around the tampon. In a survival situation, keep this netting in a clean dry place (such as a condom) to use for fire-started later. 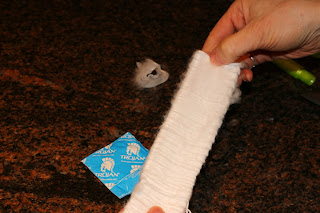 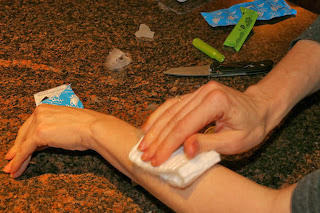 Apply to wound. Notice I have already un-packaged the condom and removed the tip. 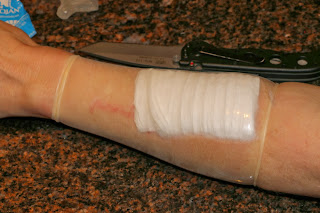 Carefully roll the condom over the cotton. It felt a little tight. It was not uncomfortable. The condom added pressure and waterproofing to the situation. The condom tears easily - Hubby suggests using a sheep intestine condom, but I have never found any UNlubricated - which is important for emergency first aid. 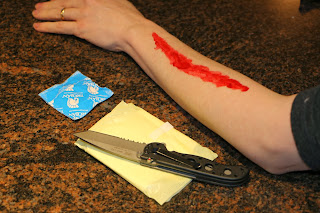 If the wound was larger, I would use the Always pad. A pad is smaller/more practical to carry than cotton squares and much more absorbent. 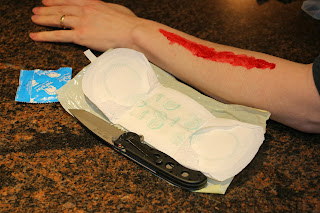 Leave the pad attached to the outer plastic. This will help keep the wound as sterile as possible. Also, without the plastic attached, the exterior would be tacky. 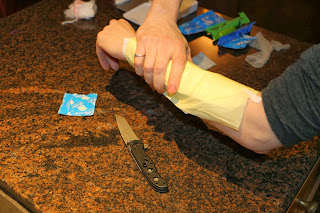 Cover the wound. It is possible to do this alone, but much easier with another set of hands helping especially when it comes to applying the condom. 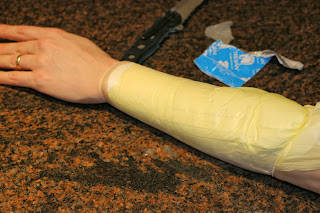 Roll the condom into place. This should be done slowly and carefully. It works best if PRIOR to cutting off the tip, you gently stretch the condom to make it more pliable. It took a few times to get this right. If you had a clean sock, paracord bracelet (Blog Link to Paracord Bracelets ), or other tie or tape then that might work better. (I'd use my duct tape). The condom does add pressure and waterproofing which is nice. On a big character a condom would not work, though.


Your intrepid SEAL has just grabbed the girl's bag and upends it to figure out what she has with her that can be turned into a life saving device. Out falls her tampons. He squints at her. "Do you need these now?"  What the... Are you kidding me? She's mortified.  Her face turns furnace red as she shakes her head.  She watches, horrified, as he constructs a last-resort filter from her empty water bottle and an O.B.

*WARNING - This does NOT take away bacteria or virus it simply takes out the particulates. 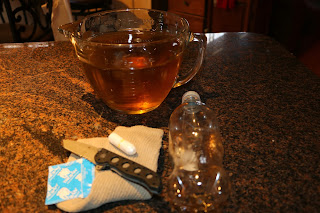 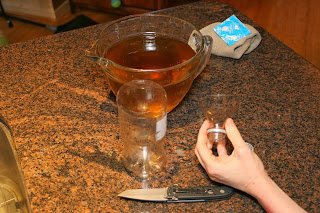 Cut the top off the bottle. 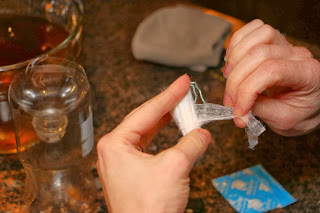 Remove the netting from the O.B. (preserve if needed for fire-starter) 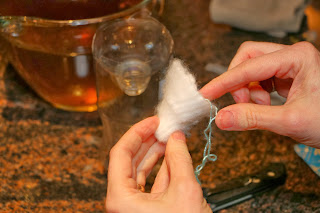 Open the O.B. into a funnel shape. (This is why I carry to different brands they have different uses.) 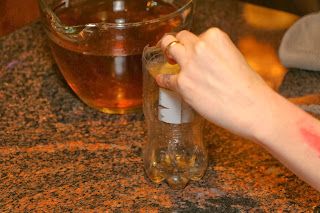 Invert the top of the bottle into the bottom to make a funnel and reservoir. Insert the cotton into the funnel so that the water must flow through in order to enter the reservoir.

Though it's hard to see in the photo, the water was NOT crystal clear but it was significantly better with no visible worms or snails.

It's worse than that? No empty water bottle? 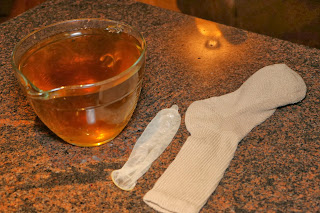 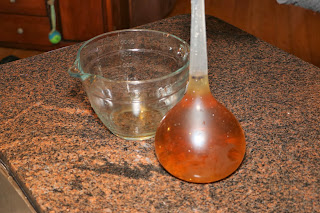 *Fills the condom with water
(in this case that's 2L
of pond water.


HINTS:
* Stretch the condom gently before filling.
* Pull through the water or use a natural waterfall, in
this case I was pouring - but fill with water and
wait. Fill more and wait. After a few minutes the
condom began to give and then it easily filled with
the 2 L. 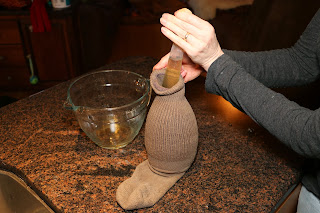 *Gently puts the water bladder into his sock in order to add stability and prevent the condom from splitting. It doesn't matter if he just ran 10 km in that sock - it doesn't touch the water.

This is what happens next. Hahahaha!

He makes a straw out of the insertion tool and sucks water up through the tampon. Could this get any worse? Good thing she's in shock from the grenade concussion - maybe she won't remember this. Maybe she'll just think it was part of a distant nightmare.


For this I used the Kotex click because it is very compact and yet gives you the plastic insertion tubing. Hubby says if he's sucking water through a tampon, he knows it's a bad bad day. LOL!

* Pull the end of the tube to its full length.
* Insert into the water and allow the cotton to absorb water
* Apply suction like a straw.
* Very little comes up at a time, so its a bit of work.
* After using the tampons for either mode of filtration, allow them
to dry, and then they can be used for
fire-started material. (Don't use a second time as filtration).


Hunky hero isn't done. He finds it funny that your heroine is so squeamish, putting her even more off balance than the earthquake that destroyed the city. He's running through her sanitary supply pretty quickly.

Bet you thought I couldn't come up with ways for tampons to help in food  procurement.
*  The wrapper is mostly water proof and can be blown up and tied
off and used as a survival fishing bobber.
*  Even the short little string might be used for making a trap.

Use as fire-starter. This is particularly good if your character can find some pine sap to rub over it or some of her Chapstick.

And finally, here is a tampon being applied for stealth:


Or even for weaponry
* A tampon makes a lovely tail for a molotov cocktail.
* (try not to giggle when you read this - I'm serious!)Tampon Taser
(Blog Link Tasers) 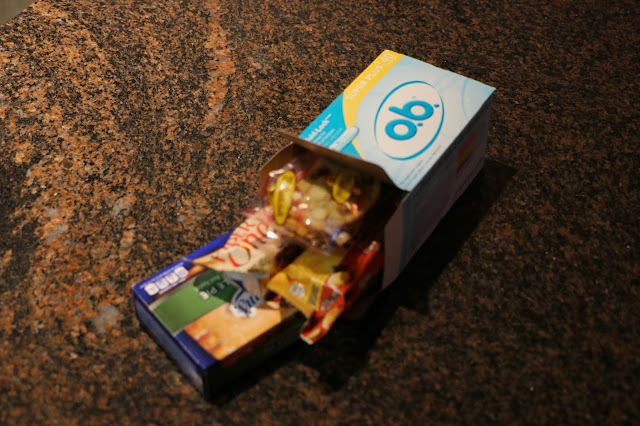 Hiding your snacks from the boys.