Fiona -
Hi Chief, thanks for joining us on ThrillWriting - that's a very nice kilt you're wearing. Can you tell us about the special occasion?
(Great legs, BTW)


Chief Silverii -
It's great to be back. I love your work - the content is actual police academy quality.

Sure, My police department - The Thibodaux Police Department is teaming up with author Liliana Hart to raise awareness and money for cancer research. The kilts will be worn by officers and team members participating in the Warrior Dash on Oct 11 in Louisiana - that even includes Liliana Hart.

Fiona -
What a great cause.

I know that you are very involved with your community and are often seen doing spectacular things to bring awareness and needed funds to worthy causes, I remember your pictures from Breast Cancer Awareness month last year. As a matter of fact, I only know good cops. Really good cops who serve on duty and off. But I also know that's not always the case. Do you mind if we chat about that? Please first tell us about yourself. 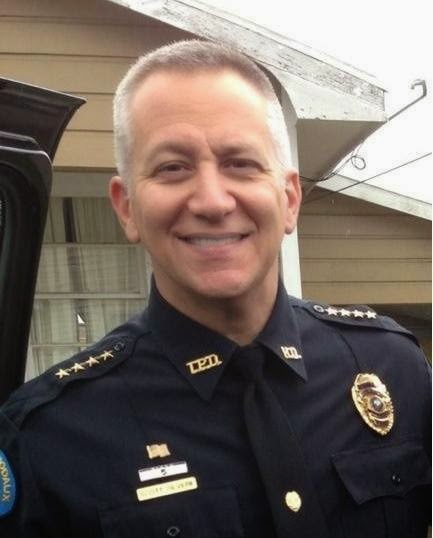 Thank you, we are the city's police department after all. Yes, tough topic, but let's talk about it.

I'm Scott Silverii - I'm from south Louisiana's Cajun Country. I've been in law enforcement over 24 years and currently serve as the Chief of Police in the City of Thibodaux (La). I began my non-fiction writing once I completed my PhD in Anthropology from the University of New Orleans. I self-pub my dissertation - A Darker Shade of Blue and then sold an extended manuscript to Taylor & Francis Group where it was published by CRC Press - Cop Culture: Why Good Cops Go Bad.

Fiona -
Temptation. When one is in a position of authority it is so easy to cross a line. What kinds of roadblocks are inherent in the system that would help to weed out people who might abuse their authority prior to coming onto a police force?

Chief Silverii -
It begins with an in-depth application process that includes a quality background investigation. Too often, agencies accept friend referrals - those usually implode down the road. Education is also key - the officer must be taught the dangers inherently associated with independent positions of authority. Accountability is the base line - without it, everything fails. No room to turn a blind eye, or allow your buddy to slide - paths of least resistance lead to falling for temptation.

Fiona -
Once an officer has taken his oath, as they move deeper into the cop culture, how much do cops overlook the wrongdoings of other cops? It seems to me, if it's not nipped in the bud, you'd have cops gone wild.

Chief Silverii -
It can become a slippery slope. Officers are afforded a wide range of discretionary privileges associated with performing their duties. You can't paint them into a box with policies for every possible encounter. It's difficult for cops to judge other cops on actions attributed to discretion.

Corruption can take many forms and levels from not performing your duties to committing crimes. There is a Code of Silence that is inherent. It's the “us versus them” mentality. This begins in the police academy - cadets learn that the class is punished for the mistakes of one. Therefore, they cover each others butts to save themselves from the discipline - while building brotherhood, it also teaches covering up and the No Rat Rule.

Fiona –
You're writing a novella that takes a fictional look at this, can you tell us about your plot line

Chief Silverii -
I was invited to join you and five other amazing authors in an anthology called Unlucky 7 - each author writes a novella based on a small town murder mystery. My work, Bayou Backslide, looks at the temptations of police work. Even in the face of investigating the ultimate act of victimization - murder. What I find fascinating about writing about police fiction is exploring more about the effect the job has on the officers, than whether or not the officer can do the job. This work will look at how temptation, discretion, autonomy, and misplaced loyalty effect the cop, the agency, and the community.

Fiona -
Very interesting. Okay, let's look at some of those aspects. Just coming home from the Writers' Police Academy, we learned about some of the awful things that cops experience on a daily basis. Over time, they develop an "us against them" mentality. Can you talk about some of the things that impact an officer and the changes that are globally seen by individuals facing the challenge of police work?

Chief Silverii -
WOW - WPA was another amazing event. I'm still on a cloud.

The culture of policing is a powerful influence. If you are familiar with Janis' concept of Groupthink, it's similar in this profession.

Policing depends upon homogeneity or everyone looking, walking and talking the same way in order to be cops- compliant. No room for the Bruce Willis or Mel Gibson characters. Though they make for great movies, they would also make bad reality.

Officers go through transition stages of socialization - or Fitting In.
*Once they enter the academy - they realize that everything they
thought they knew about the job from watching TV, movies, and
reading is WRONG.


Fiona -
Over time, how does this effect the "bad cop's" decision making?

Chief Silverii-
Path of least resistance. Complacency becomes the rule. Not making waves is the ethos over “to protect and serve.” - If I work hard, then you look bad. If I make a mistake while making lots of cases, then the sergeant will get the grief - therefore, don't make cases. Mike Roche reminded me of a saying – “Little cases = little problems, big cases = big problems, no cases = no problems.”

Fiona-
So that would be the kind of thing one would expect in any organization.

Let's talk about cops who go over to the dark side. The ones who think they can, and possibly do, get away with some pretty heinous stuff. To charge them would look bad for the sergeant. What kinds of things could a bad cop do that is particular to that cop because of their position?

Chief Silverii-
It's unlimited - From trading sex for a traffic ticket, to taking bribes for providing security, or looking the other way. Even allowing the drunk to drive off because the cop doesn't want to do the paperwork is unacceptable.

Understand, we are talking about a small population of cops fitting this dynamic - most are committed and honorable public servants, but in a club of over 800,000 there's gonna be bad apples.

Can you tell us writers who are writing good cop/bad cop plot lines what might happen once the police find out that a cop has been involved in something pretty big - a murder or drug distribution for example - how do you police the police?


Chief Silverii –
Internal Affairs are the organization's integrity gatekeepers. They operate independently of general police assignments and are often unpopular among the other cops. Old days they were called the Rat Squad. A chief or sheriff also has the option of referring cases to the state police, the state's attorney general, or a federal agency.

Fiona -
The federal agency would depend on the crime. As my last question - what would you like us to know, what would I never guess about this particular topic?

Chief Silverii –
The process of socialization is so powerful that it takes a special (not impossible) person with an established moral / ethical center to avoid the pitfalls. I applaud those individuals. The old guard is retiring or dying off. This new era of technology and accountability is leading us into the next phase of policing. I’m so excited. It's on the horizon. It takes forward thinking, fearless men and woman to stand in the gap and demand a better way. It's time for a Cultural Revolution in policing.

Fiona -
I am grateful to them for their service and grateful to you for sharing and also for letting us see how fab you look in a kilt.