How Can Military OODA LOOPS Help Your Readers Understand Your Character?

When I'm editing for clients, I often find myself putting in the comments: Help me follow this by using an O.O.D.A. loop. For those of you unfamiliar with this concept, let me explain.

The term O.O.D.A. loop was coined in the 1950’s by Colonel John Boyd. Colonel Boyd was an F-86 pilot and commander of a fighter group toward the end the Korean War, trying to train fighter pilots to be more effective.


I'm going to show you his diagram of an OODA loop, but please don't get overwhelmed. It's a great diagram that you might want to scroll back up and look at after you read the article - or just look at the second simplified graphic and call it a day.

Why is it called a loop? Once the character has cycled through these four steps, then the environment is changed. Their actions have changed things, and they and their fellow characters will be moving through the loop again and again and again.

Here it is simplified: 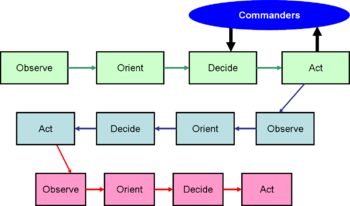 Wow - that seems incredibly simple. BUT now fill in the blanks
What about that scene would your character observe - what would catch your characters attention amidst what they are doing. Example: a robbery suspect-

How did your character align themselves with the information, what did they cognate?

What did they decide to do about it? Think hard - what in their life experience, age, cultural, temperament, current health, current relationships, and so forth, might impact this moment?

Humans go through this loop thousands of times in a day. If you lay them out in your writing, the progression makes more sense to the reader.

Example:
Barbara went on a date last night with the guy whom she thinks is THE guy.

Barbara is called to reception at work. There is a bouquet of beautiful flowers waiting for her there. She smiles. She feels excited and happy. She beams as she walks back to her cubicle, grinning and blushing, accepting the comments from her colleagues about how lovely the flowers are. Yup this could be THE guy, and he obviously feels the magic too. She gets to her desk and puts the flowers down, picks out the card and sits, giving the envelop a kiss before opening it. Ruh roh! It's not from the guy she thought it was from. It's from some creeper who just won't leave her alone, and the card says. "You looked beautiful last night." She grabs the flowers and throws them in her trash.

She has a new observation. It changes her orientation. She makes a different decision. Which leads to a very different action.

If you are practicing show-don't-tell, then putting your characters into situations that show your reader walking through this loop, especially explaining their orientation (back story), you will help your readers to understand your characters so much better.

I hope you found this article helpful.