Airport Security Will Stop Your Villain

This article is written from notes taken in a lecture given by Michael MacIntosh.

If you're trying to hijack a plane in your novel. Your villain is going to have a very hard time of it. 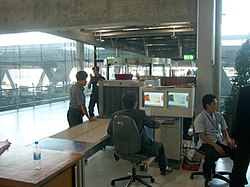 I am writing this on the heels of a government shutdown that endangered the flying public for over a month. Stress is a big deal when it comes to attentiveness and so when our TSA officials weren't getting a paycheck, and didn't know how they would pay rent or buy groceries to feed their babies, you know they were under high stress.

The TSA, and they have their challenges, do a really good job of keeping us safe.

So first, one of the ways terrorists try to take down a plane is by bombing it.

The bomb can be set off:

Terrorists seek ways to thwart of security systems
One way they could do this is to incrementally build it on the airplane by separate hidden and not hidden components.

Each time a terrorist makes an attempt, the TSA learns and tries to combat this. for example:
Shoe Bomber - the device was non-metallic after this they screened shoes and were looking for non-metallic items.

Now the TSA is looking for IEDs that haven't been designed yet. This takes critical thinking skills and awareness.

How could explosives get on a plane?

Each person on the above list could add one component. This is why the TSA uses a layered approach. Your villain might make it through a layer, but it is doubtful that he could make it through twenty layers that are all stacked up to stop him.


If you were trying to write a plot about a terrorist bomber, that's the list of 20 hurtles you'll have to write around.

Good luck with that!
Fiona