Shotguns and Rifles 101 for Writers

Home again after a fabulous time in Nottoway, Virginia where I spent time training at the Nottoway Wildlife Association. LINK Here, I met some of the most experienced, dedicated, kind, and encouraging teachers anyone could ask for. 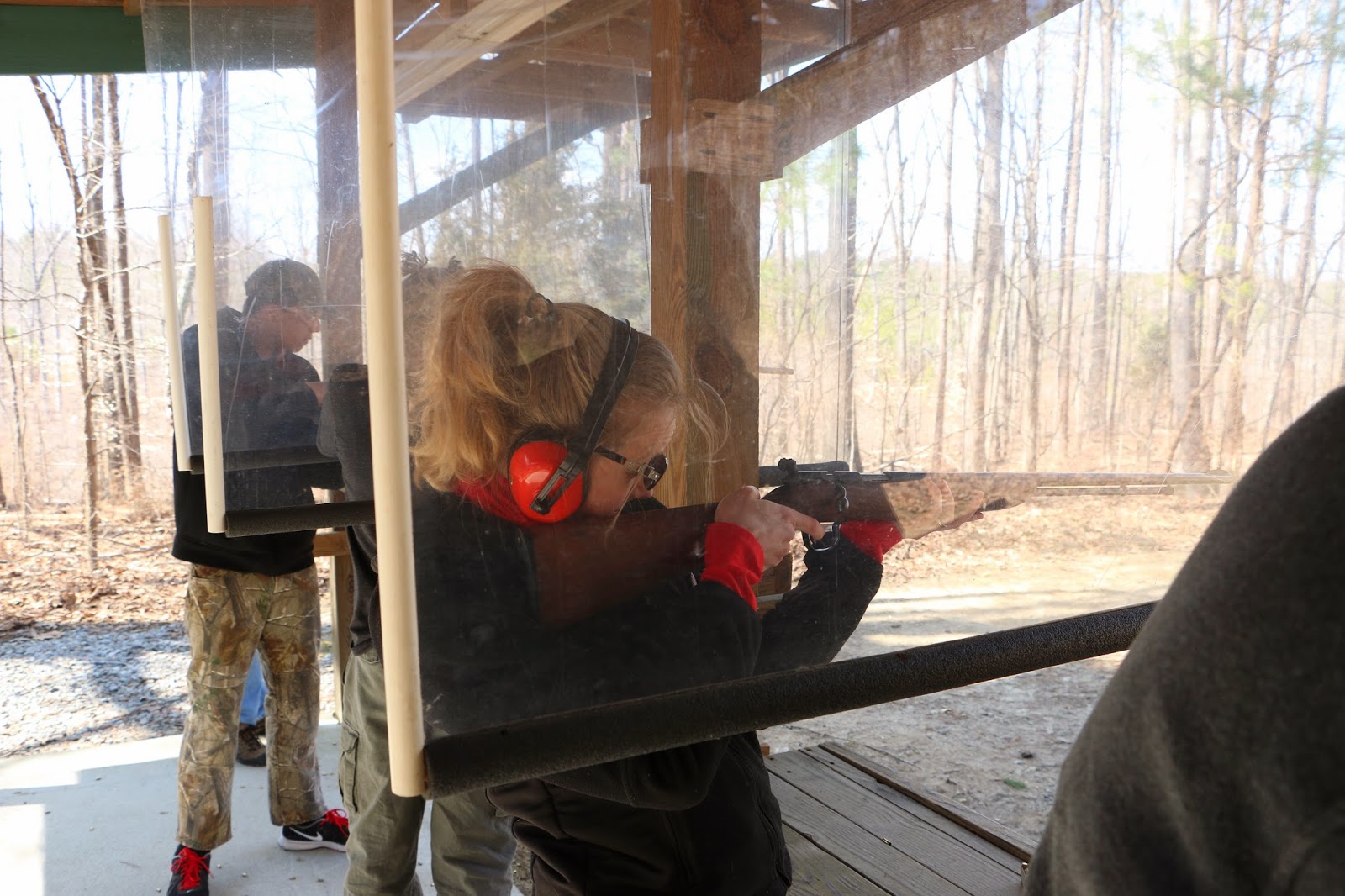 On my drive there, an ambulance raced up behind me. As it overtook me, another ambulance vaulted off of the ramp - lights flashing, sirens screaming. I was almost to my turn, and I started praying that they would not turn in front of me. My husband and son were already at the club, and I was suddenly afraid that an accident happened at the shooting range. But they barreled ahead, and I turned peacefully left. It was our first time at Nottoway Wildlife Association, and I need not have feared. They've been operating since the 1950's without a single incident.


If your novel has a scene with your heroine at the range, you're going to need to know some basics about their rules.
* No one, not even the instructors, walked around with a gun in
their hand, unless it was their turn to shoot.
* The guns were stored in a shed, or leaned on a rack.
* Once it was the shooters turn, they were directed by the instructor
to a specific place to stand. These were cement squares so there
was no mistake.
* When the shooters were about to begin, there was a loud
announcement  that the range was "hot" or "live"
* When someone needed to walk out into the range, all guns were
put down and everyone stepped away from their firearm.
* Don't make the mistake of writing your experienced shooter
taking short cuts with the rules. The most experienced shooters
were the most meticulous about how they handled their firearms.
* The shooters and everyone in the immediate area wore eye and
ear protection. Most of the people wore plastic ear protection that
was inserted into the ear canal. I personally prefer to use
headband style protection like the woman below (do not look at
her hands and write that as your heroine's grip, it's wrong)

* Assume that every weapon is loaded.
* Always point the weapon in a safe direction
(up or down) to minimize property damage
and protect everyone from injury.
* A finger is never put on the trigger or even
inside of the trigger guard unless the target
has been sighted and a decision has been
made to shoot.

* The shooter is comfortable, and balanced
* The choice of which hand pulls the trigger is based on
eye-dominance not handedness
* The legs are hip distance apart one foot slightly ahead of the the
other.
* The body is aligned with the target
* The shooter rotates at the waist not with the legs
* Knees should be slightly bent
* Lean forward
* The butt of the stock goes against the shoulder
* The cheeks lays against the stock.
* One hand supports the barrel. Elbow points downward and the
upper arm braces against the chest.
* The trigger finger rests along side the trigger guard.

Video Quick Study (3:19) covers standing and prone as well as movement. Great info if you are writing a combat scene or your heroine is military trained.

*Authors please note * Ed Rogerville explained that the proper term is firearm. "We never refer to firearms as weapons. I realize this is a widely used term but we, as instructors, don't use it. We always use the term firearm. We're not teaching or coaching, especially kids, to use force. We're teaching them how to hit a target. I know it's kind of politically correct, but that's the term we prefer to use."


Shotgun
* Has a smooth barrel
* Uses shells - shells hold lead pellets the
number reflecting the gauge tells the size of the
pellets inside.
* Once the shotgun has been fired the pellets
expand in a circumference, making hitting the
target more likely than with a bullet.
* Devastating at close range for personal
protection because of the number of holes it will put in
someone.
* Used for trap and skeet sport shooting. 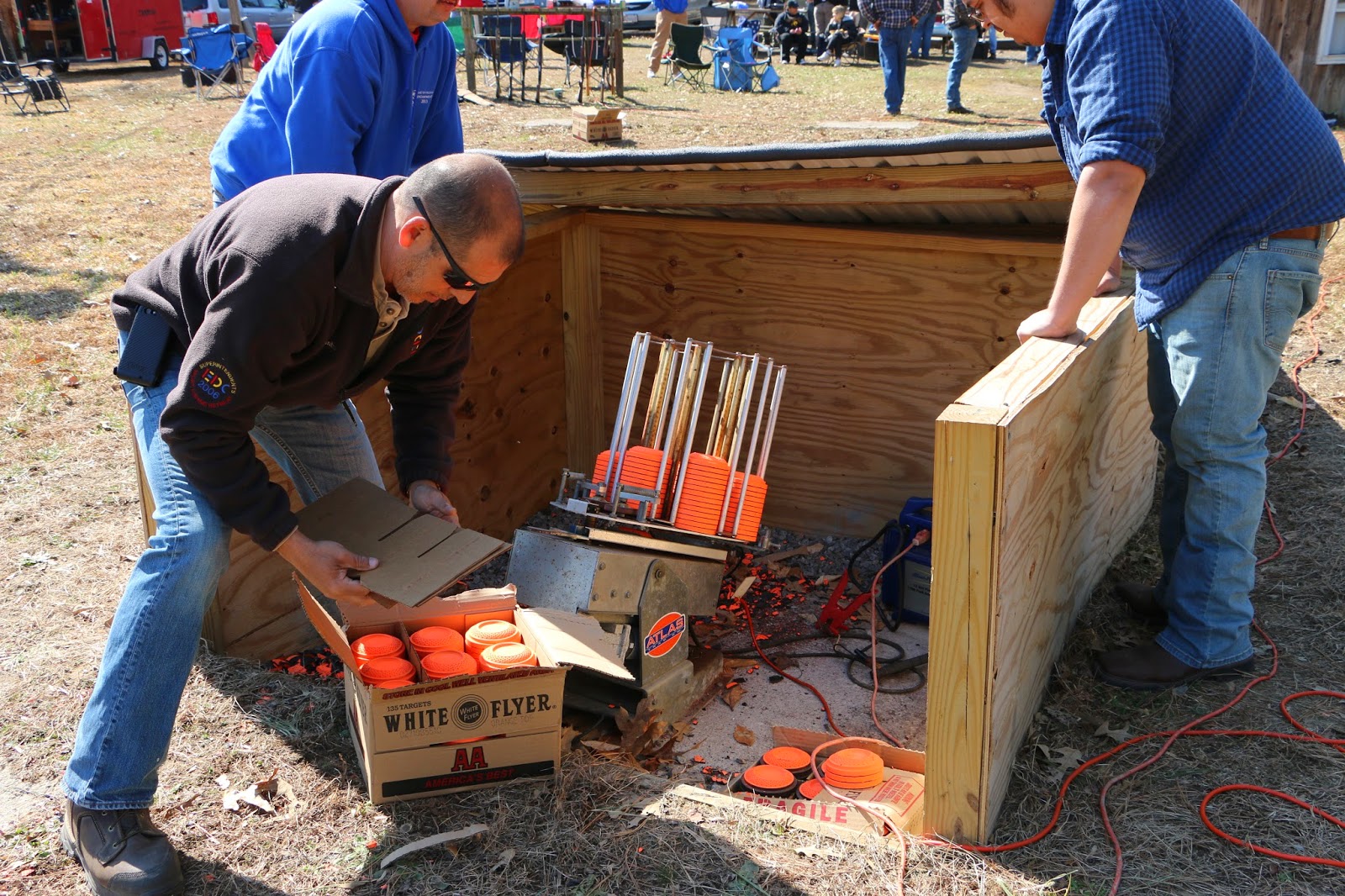 This is Ed loading up for trap shooting. The picture to the right is what the clays look like. Believe me, they look muuuuuch smaller when they're flying through the air.

* The shooter does not look down the barrel and sight the target.
The shooters eyes are both open and focused on the target.
The gun follows the focus. Even after the trigger has been pulled
the shooter should follow through by remaining focused on the
target and moving the gun along the trajectory.
* Beginner issues include: hesitation, aiming, and stopping the
movement after the trigger was pulled.
* Note that weather conditions like the strong winds we were
experiencing will effect the shot.
* Don't assume that because your character is a hunter that they are
a good shot. According to Darrell Garber, "As a general rule,
hunters can't hit an elephant staked in the yard."

* The shotguns we were using had various weights. I asked
Darrell why this would matter. He explained to me that it is
simple physics. For every action there is an equal but opposite
reaction.  If there is thirty pounds of energy coming back up,
the shooter will feel more of the recoil with a four pound gun
where a ten pound gun would absorb much of that energy.

Rifle
* Has a rifled barrel which means that it has
spirals inside that rotates the bullet like a
football to make it fly straight.
* Uses bullets
* The higher the caliber the more recoil the
shooter will experience.
* I was shooting .22s and I found it much
easier than my 9mm handgun because the
sound and light were at a distance, much
quieter, and there was almost nothing in the
way of recoil.
*There are different kinds of rifles such as:
`Single action
`Bolt action
`Semi-automatic
* Deadly to 500 yards

Darrell was kind enough to let me shoot his AR15. Yes, I should be leaning forward. This was my first time shooting an AR and frankly, I was afraid of the kick. But there was less than my 9mm. It was very smooth, and a whole lot of fun.

As a side note, If you are near Nottoway, Virginia, the Nottoway Shooting Sport at Nottoway Wildlife Association offers classes to non-members. They have a beginners class as well as personal protection in the home (That one my husband and I are signing up for) at very reasonable prices. So check them out. LINK

See this article in action in my novella: MINE