Well, That Really Stinks - The Smell of Death in Your Writing/Reading

Thanks for inviting me back, Fiona! Folks, she's the one who chose this topic. So, blame her if this post ruins your appetite. 😉

Around the second or third day after death, a greenish skin discoloration starts on the right lower abdomen. The discoloration spreads over the entire abdomen, then to the chest and upper thighs. It’s at this point when the wretched stench arrives. Sulphur-containing intestinal gas and a breakdown of red blood cells produce the discoloration and the putrid aroma. Bacteria, normally residing in the body to aid our immune system, contributes to putrefaction — commonly known as decomposition — after death.

Not only does this bacteria give the body an unmistakable odor, but it

If someone dies from a bacterial infection, marked putrefaction could occur as quickly as nine to twelve hours after death. Otherwise, it can take a few days, depending on various factors.

Need a quicker time-frame for your story? Say the victim suffered with a bacterial infection for days/weeks before death. Or they were addicted to drugs, especially cocaine.

My buddy, Garry Rodgers, once had a case where a large lady (250+lbs.) was brought into the ER in cardiac arrest from a cocaine overdose. She died on a Friday night, and he examined her in the ward to make sure there was no sign of foul play. He then sent her down to the morgue. On Monday morning, Garry went to autopsy her, and when he rolled her from the cooler and opened the shroud … she was green! Not a light green or a dark green but an Incredible Hulk green.

What happens in cocaine overdoses is that the mechanism of death is usually from an extremely elevated body temperature, because the cocaine molecule attaches to neurotransmitters, which cause the body’s thermostat to stick wide-open. The victim literally cooks to death. That’s why most cocaine deaths are associated with significant antemortem muscle and brain action, like excited delirium.

So, what happened over a couple days in the cooler was this … her body temperature was slow to cool due to her mass and an estimated 110+ degree core temp at death. Despite the outer temperature in the morgue refrigeration, she was still insulated by her clothing and the shroud wrap. Putrefaction set in so fast that her palor mortis (color change) skipped the normal pink-blue-gray-white phases and went directly to green.

Back to the timeline of death ...

By day seven:
By week two:

After three to four weeks:

Unless the corpse is refrigerated, kept below 32 degrees Fahrenheit, body cells will die. This process is called necrosis.

Autolysis and putrefaction occur in tandem.

Autolysis: The body purges itself of bodily fluid. Organs with the largest blood supply liquefy, mix with blood, and seep out any and all orifices. Some mistake this fluid for blood due to its reddish-brown color. As the fluids build, pressure breaks down the abdominal wall, flooding the body.

If your victim has been out in the elements for a number of days and reaches this point, the skin would take on a bloated, greenish-black appearance. Check this post for more detail.

Decomposition is caused by bacteria and insects breaking apart the body. Many factors determine the rate of decomp. There is, however, a basic guide to the effect of the environment on decomposition. Casper’s Law states, if all other factors are equal, a body exposed to air decomposes twice as fast as one submerged in water and eight times as fast as one buried in soil. However, soil acidity greatly affects bone preservation. High acidity soils with a PH less than 5.3 will rapidly decompose bone. Whereas neutral soil with a PH of 7 or more can allow a skeleton to remain in remarkably good condition for centuries.

For bodies in water, during the decomposition stage skin can deglove. The underlying tissue breaks down, muscles and tendons release, and the skin has the ability to slip off the body in sheets. Hands and feet can dislodge and float away. I could go on and on about how bodies react in water (when doing research for CLEAVED, I kept the Grafton County Medical Examiner on the phone for over an hour).

The same bacteria that leads to putrefaction also emits a foul odor and causes the body to bloat in unimaginable ways. If a pregnant woman dies, the build-up of gases can actually expel a fetus from the womb.

The rank stench of death worms its way into investigators’ clothes, hair, mouth, nostrils, even their skin reeks. In CLEAVED, Niko mentions the hamper Sage stuck out in the mudroom – marked “Death Laundry” – to help keep the wretched stank from seeping into their home.
Well, there you have it. Death isn't pretty but it's a necessary part of life. 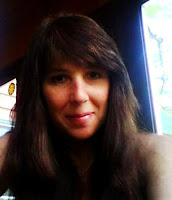 You can get your copy of CLEAVED and read about death scents. Here's the LINK