I arrived in Nashville, Tennessee for Authors’ Combat Academy and the whole weekend I felt like I was walking around naked. It was a little bit like that feeling you get when you’re dreaming about your glory days in high school, standing at the blackboard solving a problem for physics class, and you realize that you’re only wearing your underwear -- and it’s the orange and purple granny panties your mom bought you at a 10 for 1 sale at JC Penny’s. Yeah that dream – or maybe your reality. Hey, I’m not here to judge.

The reason for my distress was that I traveled for the first time by plane in fifteen years. I like to drive. I like packing whatever the heck I want to pack, pace my trip at whatever speed I want to pace, and tool around whenever I want to tool around. Okay, I just like control.

Remember this is a non-judgement zone.

Also, by driving, I would have avoided the drunken giant who sat next to me on my last leg, who opened with "Hey, my wife just left me, and I’m messed up – I hope I’m not inappropriate."
"Dude. . . "(shakes head, takes notes for future novel.)

No car keys. No EDC (save my paracord -- which, by the way, came in handy when an instructor was building a booby trap). . . 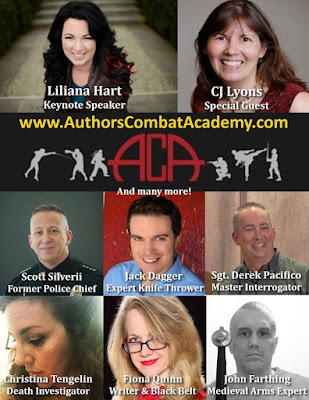 Missing those things which I usually have on or about my body was really uncomfortable for me and left me with that "I forgot to pull on my pants" feeling. (And again, I’m noting this feeling for a future novel.) It was slightly discombobulating, a low hum of “something’s wrong”. But believe me, there was absolutely nothing wrong with the weekend that I just spent with the fabulous people at Authors’ Combat. WHAT A BLAST!

You all know that I am a HUGE, VOCAL, possibly even OBNOXIOUS advocate of hands-on experiences for writers. I know many of you, for reasons of health, location, and laws, may not get to try everything you’d like to in your novels, but I truly support and believe that if you can swing it, SWING IT! And Authors' Combat gave us the opportunity to do just that. 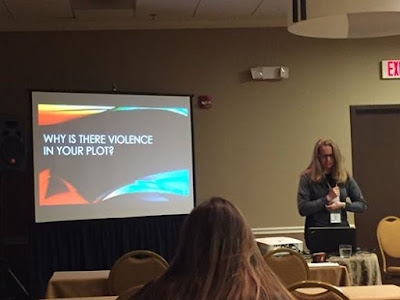 I was at
AUTHORS' COMBAT ACADEMY to present. My talks included such topics as understanding the psychology behind violence and trauma. We also talked about how humans approach each other with the possibility that an interaction ends very badly, but also the path to a happily-ever-after at the end of your story.

There was a wealth of information available from professionals who did both presentations and one-on-one question and answer sessions with authors like --
Scott Silverii from SWAT ACADEMY and
Lilliana Hart who has sold a bajillion novels (that translates to “shit-ton of books” here in beautiful Nashville) as an Indie author and their SILVERHART resources for authors. (I'm a member, are you?)

And too, there’s an enormous amount of camaraderie that’s developed when you're being tossed (with your permission) to the ground and handcuffed by Sgt. Derek Pacifico from WRITERS' HOMICIDE SCHOOL, or learn to throw a knife from world knife throwing hall of famer Jack Dagger (hilarious, by the way. If you can get to his shows please do – and tell him I sent you. And if you can't catch his show  but your hero is throwing a knife to take down your bad  guy, Jack has a DVD on his website so you can try it at home and know how to write that move and make the knife stick).

Imagine, if you will, how edifying it would be not only to experience the hands on opportunities so you know:

the heft of a sword, how it reverberates after you hit a shield. 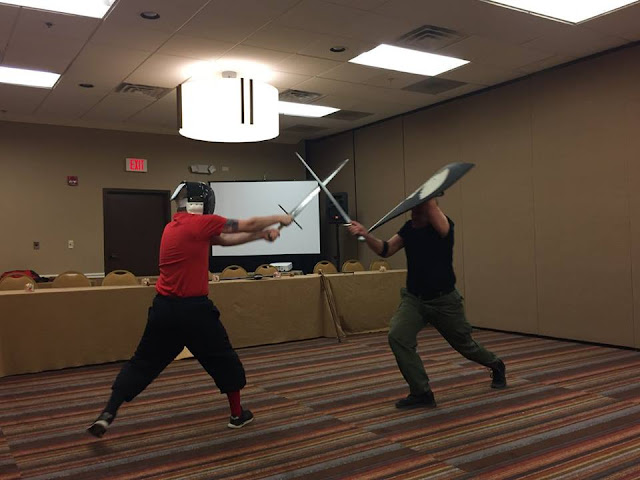 but you’ve also played with the weapons in the weapons room. You've had ninjas help you choreograph your big fight scene. You've learned how a self protection move can take down your bad guy. And you get to try it yourself! 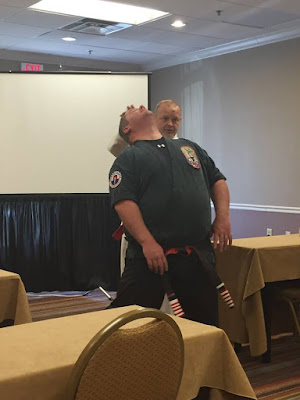 Imagine that you got a chance to talk to Sgt Pacifico or Police Chief Silverii and you not only heard what an alpha males voice sounds like (it’s a particular timbre), but you've seen how they move about in a public space. You might notice that they choose their seats facing toward the room with their backs to the wall (and how subtly stressful it is for them when someone else takes the alpha seat first.) Talk about fodder for character development!

Or you got to hear Liliana Hart give the keynote that was deeply inspirational and affirming and made me want nothing more than to leave the room immediately and start putting words on the page.

Huge kudos to Eli Jackson and AJ Scudiere – what a marvelous, smooth, laid back, fun, interesting (delicious!) event they put on. I am so looking forward to going next year. And seriously, as soon as Authors' Combat Academy announces sign up for next year, mark your calendar (right now it's being planned for March 31- April 2nd) and stake your claim on a space. You definitely want to be here.

And as always, a big thank you ThrillWriters and readers for stopping by. Thank you, too, for your support. When you buy my books, you make it possible for me to continue to bring you helpful articles and keep ThrillWriting free and accessible to all.