InstiGATOR and the Collective Unconscious

Readers have been asking for Gator's story and here it is!

InstiGator is a military romantic suspense with a psychic twist that takes place across the globe. And being Gator, this is also a book with some magical realism - though that magical experience that Gator has is based in research.

Many of my books talk about  the sixth sense that we all have. Some people through their life's experience exercise their abilities more than others. Often this comes from being in threatening experiences that makes one stretch for any information possible to stay safe.

If you pay attention, you'll see it happening in your own life.

Let me give you an example of the last time I had an "affirmation" that I was connected, as Jung hypothesized, to the larger whole:

I was getting ready to go to San Francisco. It's a large city with lots of tourists. I started thinking about Las Vegas and the 500+ people shot when they went to a concert. I thought about what I would do and how I could prepare. I took out my Search and Rescue First Aid bag and pared down my kit to the essentials of what I could carry in my pocket and would be the most help in that scenario. I packed both of my tourniquets.

Hubby was getting ready for our trip. He came in and said that he was thinking about San Francisco and terror attacks especially along Pier 39, where we had planned to be on Christmas day. He said it would be full of people and that that would be a likely targeted location. Then he suggested I pack a tourniquet in my pocket along with some clotting bandages like he had.

Weird huh? We'd never travelled with tourniquets in our pockets before.

Spin the clock forward a few hours, and there on the news is a report that the FBI thwarted a terrorist attack that was planned for Pier 39 in San Francisco for Christmas Day. (news article)

Thank goodness we didn't need our supplies, though we carried them with us anyway. Now, imagine the difference in awareness.


Had the FBI not caught the guy, we would indeed have been on the Pier during a terror attack and put our tourniquets to use. How scary is that?

Getting affirmations that the collective unconscious is at work helps build our trust in that part of our instincts.

In InstiGATOR  Gator Aid Rochambeau depends on Lynx to keep him sane as they both experience their connections in the ether and how it complicates an already complicated mission. ENJOY! 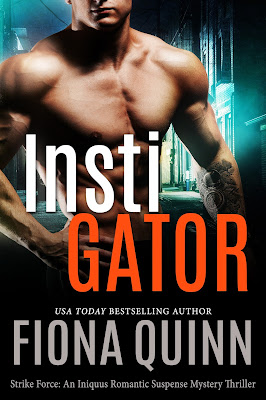 
In a life or death game, all bets are off!


Christen Davidson, a helicopter pilot for the Army, just had her day go from horrific to something far worse. Fellow operatives are in danger. Christen is desperate to fly a rescue mission. Instead, she’s ordered to act as an asset in a high-stakes, international game. She didn’t join the military to play dress-up, but she can’t disobey, even though this assignment is far outside of her comfort zone.

Gator Aid Rochambeau, a retired Marine Raider, is an Iniquus elite operative who volunteers to act as security on the Davidson mission. Yet, as the job gets underway, he is unprepared for the psychic confusion that swirls through his system. New to his psychic experiences, he reaches out to fellow Strike Force member, Lynx, for understanding, only to discover she too is battling a strange vortex of information and sensation. The one thing they both understand is that lives are on the line.


For this mission, there is no place to run and nowhere to hide from the men who have their eye on a billion-dollar deal, and the only ones standing in their way is this improbable team. The gamble they’re making could mean life or death, but the reward could be so much more!


Once again, USA Today Bestselling romantic suspense author Fiona Quinn brings you the unexpected story of spies, murder, and mystery playing out on a world stage. INSTIGATOR is the third book of the Strike Force Series. It can be read as a stand-alone novel.