How to Have Your Character Fail by Succeeding.

One of the things that I like most about my gym, is the people watching. My gym, like most, has its fair share of people who enjoy flirting with themselves in the mirrors, but there also some very interesting characters. There's the grandpa who comes in his pajamas and slippers, for example.

More power to him!

There's this one twenty-something guy who is remarkable because he's sunny. Likeable. Just plain nice. Charl is his name; he calls me "girl," as in "hey, girl!" I don't think he knows another Fiona, and my name probably didn't stick when we met.

Charl was waiting his turn on the machine, while his girlfriend lifted, so I wandered over to ask him if he'd set any New Year's resolutions for the gym. He said he wanted to gain some weight and get to two-hundred and ten. I was a little confused at first. Everyone I know goes to the gym to lose weight. But he was saying he wanted to try to gain weight by building muscle, getting stronger and bigger.

I have my own gym goal. I've been working on it for over a year. Because on the Search and Rescue crew we have to be ready to carry someone out of the woods, I had to get stronger. I set my goal at doing three pull-ups. I have never done a pull-up in my life. It's a process to get to the point where I could lift the weight of my own body. And today, I can do that. I can do three sets of twelve - of the weight I weighed when I started this goal. I don't weight that weight anymore.

That's why I have done exactly ZERO pull-ups in my life time.

Though I wear the exact same clothing size, I am twenty pounds heavier than when I started working on my goal. I've never been this heavy. I am heavier now than I was when I was nine-months pregnant. And yet, strangely the same size I have been my whole adult life.

That, right there, is mind boggling.

In my head, I'm trying to figure out if I will ever be able to do a single pull-up. The more I practice lifting, the heavier I get. The heavier I get, the more I have to lift. It just seems impossible! How is it that anyone can do a pull-up? I just don't understand.

And this leads me to the point of this essay, sometimes outcomes are hard to predict. A path is determined, the path is walked, and low and behold when the end is in sight, the end destination is not where you set your compass heading.

In my writing, I think this is interesting for character growth. It's expected that a character will be going along and something flies out of left field that changes their perspective. Boom! They are hit in the face with something unforeseen. But isn't it an interesting twist to head a character down the road, have them follow their ethic, work hard to reach their goals and then have them discover that their success puts them further from their goal?

That was one of the themes that I played around with in Instigator. Gator Aid Rochabeau is the best of the best -- and when he follows his code, it puts him in opposition to what he wants.

Have you seen this in other books you've read -  where the author has the character fail through his or her success? Has this played out in your own life?

Speaking of Instigator - I had a scary event happen in my family this week.

I'm not giving anything away when I tell you that Instigator takes place in the South China Sea. In the book, I mentioned how lethal box jellyfish are. Indeed, they are the most poisonous animal known to man. My brother just contacted me to say that his family was on vacation snorkling in the South China Sea and his daughter was stung by a box jelly fish. She is going to be fine. But knowing what I know about the effects of the poison on a system, it is a miracle that she made it through the event.

Let's all make it our New Year's resolution to leave those kinds of adventures on the pages of a book! 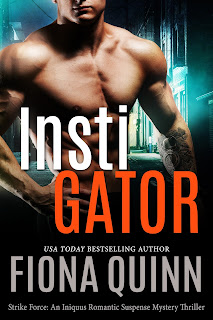