DISCLAIMER - This is a non-political site that is geared to help writers write it right. I am presenting information to help develop fictional characters and fictional scenes. In no way am I advocating any position or personal decision.


So things got pretty serious. Guns were drawn; a body sprawls on the ground. What the police find on the scene has a lot to do with what kind of bullet you as the author chose for this plot line.

Once your heroine has a gun in her hand, there are other things to consider. Let's begin understanding bullets and how they impact plot.


* The bullet is just the top piece of the round - the part that hits the
target.
* A cartridge or round is the entire component
(brass + powder + primer) When the primer is hit by the hammer
or firing pin, it ignites the powder in the shell, forcing the bullet
in the only direction it can go - down the barrel of the gun.
* The caliber is a measurement of the bullet. (If the bullet has two
numbers the first is the width of the bullet the second is the
length of the round.)
* Another way to measure a round is by grain the higher the grains
the more the bullet weighs - the slower it goes and the deeper it
will penetrate.

INTERMEDIATE - How to read a bullet box:

*Full Metal Jacket (FMJ) - the entire case is encased in metal,
offering the most penetration through your  target. The base is
exposed showing the lead.
*Total Metal Jacket - (TMJ) - The entire case including the base
is covered
*Semi-jacketed (SMJ)- or just (J) for jacketed - the jacket only
goes half way up the bullet. 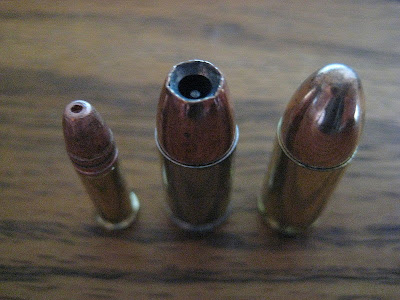 
Flat Point - (FP) has a flat tip (pictured below - left)
.
Round Nose - (RN) (below center) - This bullet will not expand in
size with impact; it will continue on its trajectory.

This is an author's decision if she wants the victim to have an
exit wound, to die of impact/blood loss, or for the bullet to hit a
secondary object or person. All of these would could result
from a RN Click HERE to go to my blog article on Blood
Spatter.

Hollow point -(HP) the tip is hollow. When it hits its
target it will expand very quickly to almost 3x it's
original size. This means that the bullet expresses
the power inside of the body, damaging more
tissue than a round nose bullet. This expansion
also reduces the chance of a bullet exiting the
body and hitting someone nearby. This is safer
for self defense where innocent people are
nearby. This type of bullet creates massive pressure
and the victim is likely to die of a brain embolism.
Click HERE to go to my blog article on EMS and
gunshot wounds.

.22 is cheap so it's good for target practice, but has minimal penetration - not great for defense.

Video Quick Study (5:56) This is a little in depth but shows him weighing the bullet (grains) and measuring the bullet for caliber, and also ballistic tests through testing medium.

.25 is used in small pistols it has a big kick - so a lot of recoil.
.32 penetrates a little deeper than a .380 and has less recoil
.25 for a very small gun this is a good self-defense round


This is probably as big a caliber as your character needs. But if you are trying to make a decision between giving your character a 9mm or a .45 here is a good comparison video
9mm v .45 bullet (17.31)

.40 is the same as a 10mm. But a 10mm is really a .40 caliber magnum (I'll explain in a second) The .40 does not have the penetration of the 9mm because it is heavier and takes more power to shoot.

.45 is highly effective in dropping the target in one shot.

A magnum round is a high powered round. So for example you can have .22 magnum or .45 magnum
* Lots of recoil
* Painful to shoot
* This is for hunting (a back up when an angry bear is running full
tilt at the heroine) not usually for self-defense.
* IT IS IMPERATIVE THAT YOU USE A MAGNUM IN A GUN
THAT CAN HANDLE IT -
The gun must be designed to handle magnum bullets unless of
course you want your heroine to put a .44 magnum (name of a
round) or .44 special (name of a round) and blow her gun apart
because the gun couldn't handle the pressure.

Popular wisdom says, a bullet shot from any handgun at a distance of three feet will probably stop anyone. Most of the time a civilian is shooting, it is that close in range. Stopping power is not as important to a civilian as it is to a police officer whose range moves out to nine yards. So your gun/bullet choice depends on who is doing the shooting and why.

PLOT TWIST - One thing that I should point out is that just because a bullet will load into the gun, it does not mean that there will be success in shooting it. A particular round might misfire or jam. Once you know which gun is being used, research which bullets work best. Though, this could create a plot twist for you. Perhaps your heroine is new to the gun scene and buys a weapon for self-protection, purchases some bullets, loads it all up and there is a catastrophic failure. She could be hurt instead of the villain.