It's not how every girl likes to spend her Saturdays; but for me as a citizen and as a writer, it was awesome! I was a volunteer victim at an army base. The responders there were training trainers from other states in how to set up live shooter response courses.

How did I get involved?
I'm a member of CERT and a member of the Medical Reserve Corps (for mental health). To read more about these learning opportunities, read THIS ARTICLE. When a call goes out for volunteers, I do my best to show up. As a matter of fact, I'm scheduled to be in a plane crash in April. Stay tuned for more about that.

Why is it important to have live victims involved?
To be clear there were live victims and there were manikin victims. The manikin victims are created to allow tracheotomies and other invasive procedures. They are also severely wounded -  bi-amputations, perforations of the cavity with intestines dangling out. They have robotic aspects to mimic (via radio command) breathing, gurgling, screaming etc. But these are still plastic.

It is important to remember that responders are human beings. When human beings are faced with a dangerous situation their bodies respond, like all bodies do, with an increase in adrenaline (among other hormones). Adrenaline messes with your body. In a situation like the one we presented, one would expect such things as:

What researches have found is that newer experiences have a more profound impact and that an individual can handle the situation better if they've dealt with it before.

Hence,  we volunteers are moulaged (more about that in a second) to make it look like we've sustained a wound, and we act our part. We are in shock. We scream. We fight. We pass out. Basically, it's our job to present as if this were really happening so that it's not new to responders when they show up at a real-deal.

For this training, we were mimicking a live shooter event inside a dorm.

My assignment was to be stabbed (or shot) in the throat - the responder wouldn't know, and I couldn't tell them.
LET ME BE CLEAR - I was not actually injured. I was never in any danger.

Getting into character - moulage.

Moulage is a word that means making fake wounds for responder training. There's an art to it. This is how they made my neck wound.

Getting the heck out of there. Here are some writing points that I picked up to share with you: 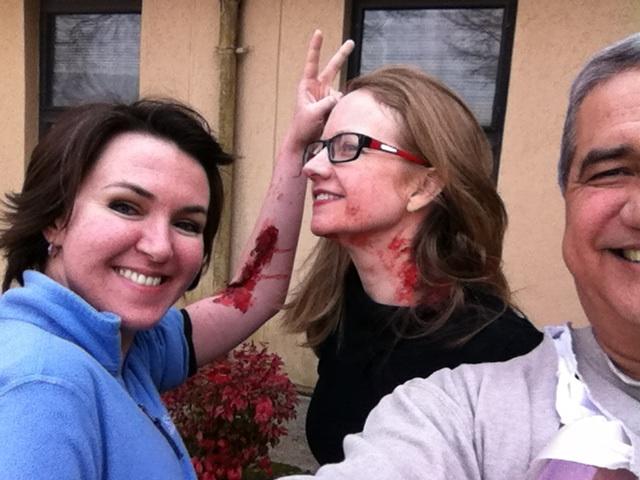 Me and two of my CERT pals, catching our breath and regrouping before we went back in the dorm and let the heroes (both males and females) save us for a second time. Mel, on the right, had a sucking chest wound so he was red tagged too. He seemed to be handling the discomfort pretty well. (Big thank you to Mel for sharing his photos) And Anna had a severed artery so she was passed out the whole time.

And that was my adventure - bet it shows up somewhere in my next plot.

Find similar articles under the tab at the top of this page marked "TO THE RESCUE."